The impacts may be more than what the landholder bargained for.

In a David against Goliath stoush, victory has never tasted sweeter for landholder Peter Henry (Henry). He celebrates the spoils of his refusing to allow [perceived or real] attempts by ERO Georgetown Gold Operations (ERO) to intimidate him.

After more than two years of having access to his land, located at Flat Creek Station along Flat Creek Road blocked by ERO and almost two years of various courtroom battles, Henry has emerged victorious and elated by the outcome.

The dispute between the parties centred on the status of the formed and surveyed Flat Creek Road (‘The Road’). The question before the Court (later appealed) was whether ERO was entitled and/or had agreed with Henry in their mining renewal compensation agreements, to restrict access on The Road within its mining lease to enable ERO to work that part of the mining lease. Alternatively, did this conduct give rise to a material change of circumstances and right to compensation in accordance with section 283B and/or 363 of the Mineral Resources Act 1989 (MRA).

Whilst Henry must still pick up the pieces of his businesses almost ruined by the events, he remains confident that all will work out positively in the end. His saving grace was remaining stoic throughout. Indeed, the support of his partner, family, close friends and supporters certainly helped in the more challenging moments of the last few years. 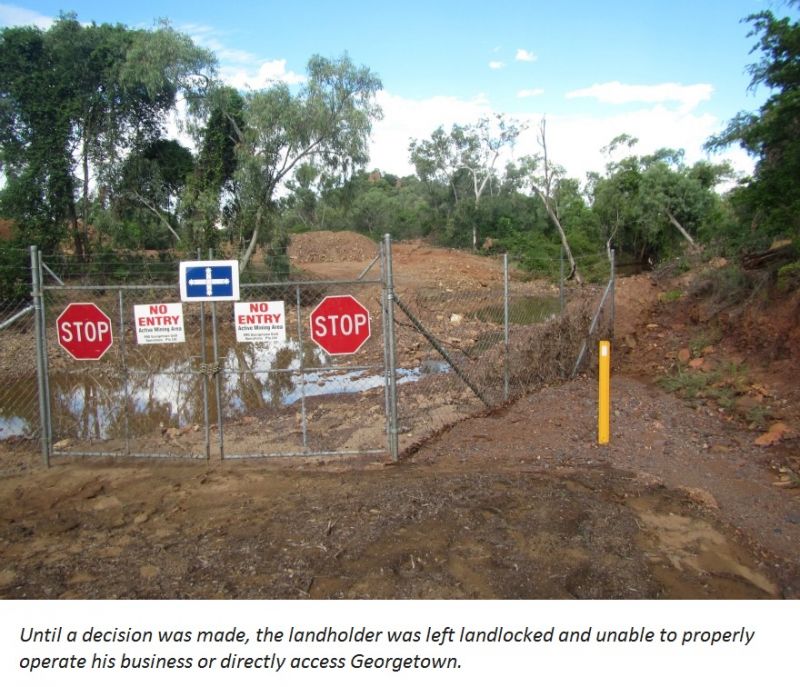 Henry is the registered lessee of Flat Creek Station, which is approximately 50km southwest of Georgetown, Queensland.

The Land Court (and then the Land Appeal Court) considered the history of the area and formation of roads from as early as 23 April 1896 when the Green Hills mineral field was declared (now part of adjoining Green Hills Station). MacDonald Town was also established and surveyed in 1896 (on Flat Creek Station). Evidence placed before the Courts from the original surveys and maps, showed a road travelling in a north-easterly direction from MacDonald Town to Georgetown. Subsequent surveys, aerial photography and maps (in 1919, 1968, 1972 and 1983) show a vehicular track in the same location to Flat Creek Station.

Henry gave evidence in the Land Court that he had used The Road since the 1970’s (although the alignment was not entirely consistent with the surveyed road) and that he and his brothers made improvements to The Road. In 1982, The Road was used to truck in the Flat Creek Station homestead, other materials and to transport cattle / stock resources. In later years, Henry’s neighbours brought in a sizable water tank and transported cattle along The Road. Various miners had graded and maintained The Road for their use however by the early 1990’s, Etheridge Shire Council had maintained the constructed road to a good standard and in fact improved parts of it, including widening, constructing concrete causeways and the like.

The ultimate alignment of The Road however did not accurately coincide with the 1919 road survey. In parts of ERO’s mining lease the alignment of The Road was found to be quite close to but outside of the surveyed area. Over the passage of time, the exact alignment of The Road in accordance with the original survey had meandered off course in places. There are a number of assumptions that can be drawn as to why this occurred, most logically due to a fallen tree or large branch after a storm or denigration of spots due to wear and tear, thereby creating a new path but still with the intention of The Road being the main thoroughfare.

As part of Henry’s livelihood, he operates an approved camping ground (and associated activities such as gold fossicking, bird watching, bush walking etc) in addition to the cattle grazing and meat sales.

ERO blocked access in September 2013 to Flat Creek Station by placing a fence and locked gates on The Road, relying upon health and safety provisions contained in the Mining and Quarrying Safety and Health Act 1999 and the Mineral Resources Act 1989. Subsequently, the ribbon of land referred to as ‘The Road’ (as formed and maintained by the Etheridge Shire Council) was significantly disturbed by earthworks undertaken by ERO constituting ‘mining activities’.

At the time that the fences and locked gates were put up, Henry had a number of guests at the campsite. The blocked access landlocked Henry and others. Henry was forced to enter into a gentleman’s agreement with an adjoining landowner to travel between Flat Creek Station and Georgetown resulting in a three hour round trip to Georgetown (more than doubling the time taken), along an unsealed dirt track – impassable during the wet season meaning during times of the year, Henry was entirely landlocked. Henry was unable to operate his cattle grazing business to the full extent as he could not get cattle trucks or stock lick to Flat Creek Station on the alternative dirt track. He was required to ‘walk’ cattle from Flat Creek Station to a road where cattle trucks could access for transport to market. Henry was forced to forgo the tourist operations during the period of impermissible blocked access.

Negotiations between the parties failed and Henry was left with little other option than to commence proceedings in the Land Court alleging a ‘material change of circumstances for the mining lease’ in accordance with sections 283B and 363 of the MRA (note: a similar provision exists in the Petroleum and Gas (Production and Safety) Act 2004). Henry sought the court’s discretion to review the quantum of compensation agreed between the parties in light of the material change in circumstances (blocked access) / right to compensation for the disturbance.

Henry feels that ERO had little regard to the health and safety of those lives adversely affected by their decision to block access to and from Flat Creek Station. A medical emergency could have spelt disaster – luckily however, the Court proceedings were decided without any medical issues arising. Ironically, ERO maintained the purpose of blocking The Road was for mining health and safety reasons.

Henry and ERO entered into a compensation agreement on 24 November 2002 in accordance with section 279 of the MRA. The agreement included a condition that the roads in the area of the mining operation would be maintained in good order by the miner. Before the parties entered into the agreement, a representative of ERO had stated to the Land Court that The Road would not be mined or affected in any way.

The Minister for the Department of Natural Resources and Mines took positive action to condition the renewal making it a requirement that ERO ensure unrestricted public thoroughfare along The Road (or provide an alternative measures to allow unfettered public access). The conditions of approval required the removal of the fences and locked gates and rehabilitation/reinstatement of the operational works on the road.

The decision of the Minister was challenged by ERO in the Supreme Court, however the Minister’s decision was upheld. The conditions of the renewal of the mining lease stood.

The Land Court decision (which was upheld by the Land Appeal Court) having considered of each of the relevant pieces of legislation concerning thoroughfare, held that The Road (whilst not entirely in accordance with the surveyed alignment) constituted a right of access to the public. The long continued use of a right of way by the public may amount to implied dedication.

The Court was then obliged to consider the compensation sought by Henry for the disturbance and whether there had been a material change in circumstances of the mining lease, as a result of Henry’s right of access having been interfered with.

On any view, the obstruction and mining of a public right of way along The Road constituted a material change in circumstances for the mining lease of the compensation agreements.

His Honour concluded that the as a condition of the 2002 Compensation Agreement regarding the maintence of roads applied to The Road. Notwithstanding, the later renewal of the mining lease included conditions regarding access and rehabilitation of The Road. Under both agreements, it had not been contemplated that Henry’s public right of access would be interfered with or if it had, that an alternative route would be provided. ERO’s interference with The Road preventing public access was a fundamental change in circumstances of the mining lease / compensation agreements. The intention of the Minister for DNRM was that The Road and right of access would not be interfered with, as reflected in the conditions of the renewal of the mining lease. 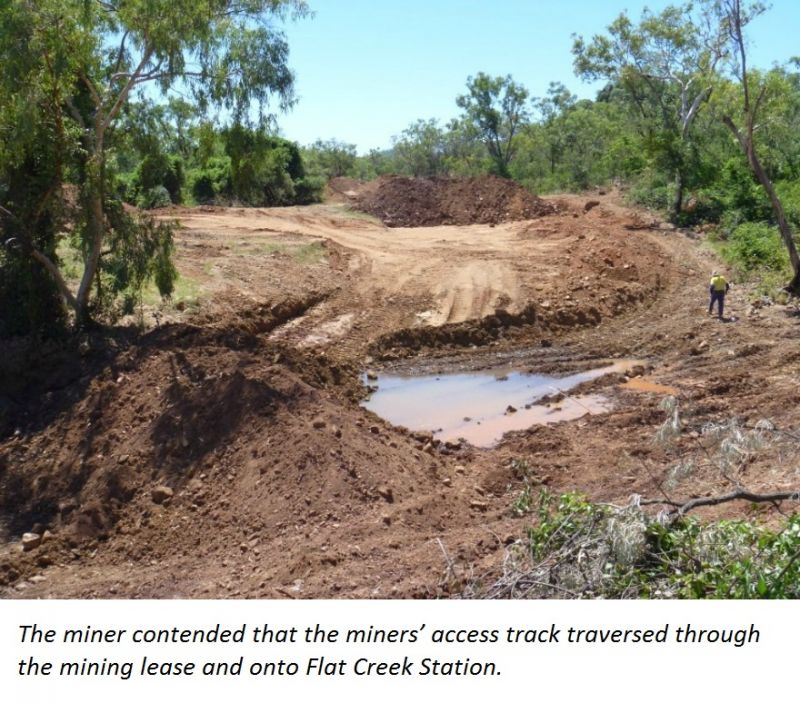 The outcome sets the benchmark for determining material change in circumstances of a mining lease.

Any change to a mining activity which is not considered, negotiated or included in the compensation agreement will invariably give rise to a right for the landholder to seek a renegotiation of the compensation (and/or other terms) with the miner.

Emanate: Barry Taylor advises landholders – do not sign anything without first seeking legal advice. Compensation agreements bind the landholder and any subsequent holders of title. Whist the changes or the document or mining operations may seem insignificant at the time, the impacts may be more than what the landholder bargained for.

Landholders must take immediate steps when activity outside the agreed terms of a compensation agreement occurs. 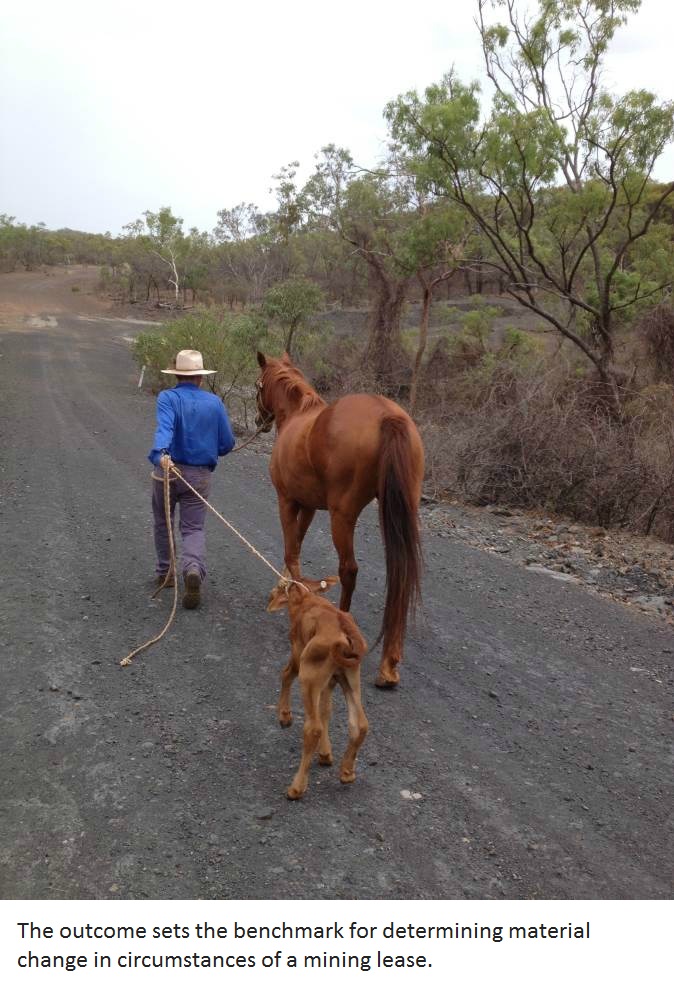